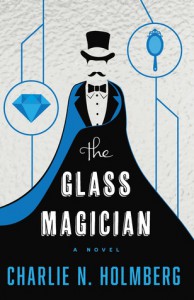 It's taken me forever and a day to even attempt to read this. Memories of the first book were not making this very appealing and it's ended up sitting on my NG shelf for almost 2 1/2 years.

However once i committed to reading it I was relieved to find that this is a better book than the first in a number of ways, mostly because there are more characters than just Ceony and Emery. Ceony is still pretty annoying as main characters go but she has a slightly better attitude this time around and doesn't whine nearly as much. Nor is she prying into Emery's life and belongings like she did in the first novel.

She is however, just as dim as she was in the first book in that she is adamant that she, an apprentice magician, can take on other dangerous magicians without any help and it's no surprise that her decisions cause problems for everyone else.

The romance between Ceony and Emery still leaves me cold, it doesn't feel right and to be honest it's annoying that Ceony is just so hellbent on trying to make it happen. She also needs to seek medical advice for the chronic blushing problem she has, any encounter she had with Emery seemed to set this off, pair this with her pale skin and reddish/orange hair and it's not a pretty picture that's conjured up.

The world building is yet again something that didn't work for me, the time period is confusing with some of the details and it would seem that the author has 'modernised' the period with details of transport, food and materials that really don't seem to fit the time. I also found the magic wasn't very well explained and I struggled to grasp what the author was describing.

On the positive side this was a fairly fast read and a lot more engaging than book 1, I'll again put this down to the fact that there were a number of other characters whom Emery and Ceony spent time with, this seemed to help keep the plot moving along and not stagnate as it did in the first book when a lot of the story was just Ceony.

Better than the first book but I don't think I'll be picking up the third one, my interest was slightly peaked but not enough to continue.