Shadows in the Mist 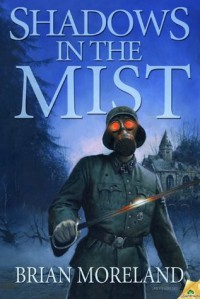 Jack Chambers sends his grandson to Germany on a mission to retrieve the bodies of his deceased platoon. He wants the truth to be known about how and why his men were massacred in the Hurtgen forest but there are those who wish to keep what the Nazis did a secret. Jacks diary gives the answers as to the horrors that they endured and also speaks of a supernatural evil that the Nazis wished to unleash on the world and that higher powers would seek to exploit today.

A solid horror that is mostly told through the diary pages of Jack, you become completely invested in the survival of Jack and the 'Lucky Seven'. There's a lot of warfare discussion and this can drag a little but the horror elements make up for it and it ends up an entertaining mix of history and occultism. I did wish the present day story had been fleshed out a bit more, I expected that there would be more of a threat to Sean and those that went to the Church but at the end it was a little anticlimactic in that sense. I did appreciate other aspects of the ending and found it be moving and therefore somewhat satisfying.
Recommended.